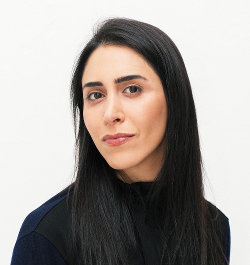 Melodie Yashar is a Senior Research Associate via San Jose State University Research Foundation within the Human-Computer Interaction lab at NASA Ames. Melodie is a co-founder of SEArch+ (Space Exploration Architecture), which in 2015 was awarded first prize in NASA's Phase 1 Centennial Challenge for a 3D-Printed Habitat. With SEArch+ Melodie collaborated on an ECLS project for NextSTEP with UTAS, a habitat concept with NASA Langley, an in-space manufacturing project with NASA Marshall, and more. In 2018-9 Melodie was team leader for SEArch+'s submissions to Phase 3 of NASA's 3D-Printed Habitat Challenge, winning first prize in Final Design as well as first prize in Construction Levels 1 & 2.

Melodie is a 2019-20' Future Space Leaders Fellow. She received a Master of Architecture from Columbia University and a Master of Human-Computer Interaction within the School of Computer Science at Carnegie Mellon University.