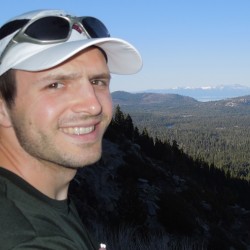 I am currently an MS student at UC Davis after earning a BS in Aerospace with an Aeronautics concentration at Cal Poly. My undergrad years were spent being a triathlete, though I'm mostly a runner now, with cycling on the side, and swimming only when I have to.

My thesis investigates turning the Boeing X-37B from an unmanned test platform into a manned, crew rescue vehicle. I'm performing initial trades, rough sizing and writing subsystem function specifications. The main areas of research include altering the propulsion system, determining the crew layout, and sizing the ECLSS system. The goal is to set the groundwork for future students who come through the HRVIP lab. The project will live on long after I graduate.