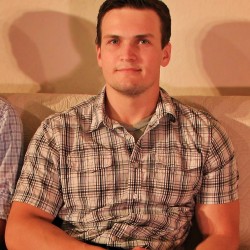 Working towards a M.S. in Mechanical and Aerospace engineering with a core focus in agricultural UAV (Unmanned Aerial Vehicle) applications, Ilya is integrating a BioSensor on-board a UAV platform to conduct autonomous field sampling for crop health analysis. This research, he believes, will improve the overall crop yield by pinpointing troubled areas on the field. Early detection of such areas will decrease the cost of the required response and the resulting impact to the harvest.

Ilya was credited a B.S. in Mechanical and Aerospace engineering from UC Davis in 2014. While an undergraduate Ilya engaged in various extracurricular activities alongside the educational curriculum. Working as a Forest Fire Fighter, he says, was one of the most exciting jobs that he has experienced. In addition to working various jobs during his time as an undergraduate, Ilya was a captain of the Advanced Modeling Aeronautics Team (AMAT) in 2012 and an advising captain the following year. Ilya's hobbies include: soccer, hiking, woodworking and creating various electronic gadgets with the most recent one being a fixed-wing autopilot system.