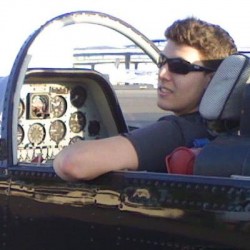 Etan received his bachelor's degree in computer science from California State University, Northridge (CSUN) in 2008. Prior to graduating he began working as a software engineer designing and building databases and web applications for a small company based out of Los Angeles. In Spring 2011 he returned to CSUN as a postgraduate student in mechanical engineering and received his second bachelor's degree with emphasis in aerospace engineering two years later. In the Summer of 2013 Etan moved to northern California to pursue his master's degree in mechanical and aerospace engineering at the University of California, Davis (UCD). His research at UCD centers on manned spaceplane cabin design and ergonomics. The products of his work include conceptual designs for a 'space ambulance' based on the X-37B and a full-size, medium-fidelity mockup of the proposed cabin used to validate crew configurations, stations, and procedures within the internally reconfigured vehicle. Etan also holds his single-engine land (SEL) private pilot license (PPL) with stall/spin and complex endorsements and has logged around 80 hours to date with instrument rating in progress.